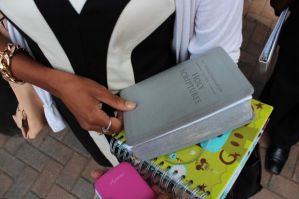 door unexpectedly. Nearly everyone I know, and most likely some I do not have experienced the knock to, open their doors and find at least a pair of Jehovah’s Witnesses standing there.

In that I find that it seems like doing nothing can be considered an inconvenient time when these people come for many of us. However, in times past seeing those people walking with satchel in tow I hurriedly closed my door before they came close; peeking out the window to see if they noticed. Subsequently, this got me thinking about why such dramatic behavior towards this group of people. I considered what I knew of them and to notice that the sources of that knowledge now were unreliable. As a result, in one moment I decided that I would allow my door to remain open to finally hear what they had to say.

I pause here; to share that in the last four years I have totally and without regret left religious thinking to the religious. Decidedly, I have determined that if I want truth I would have to seek it out on my own. Does not the scripture invite us to ask, seek and knock at the door of understanding, also, declaring that wisdom cries [out] in the street? Hence, for me to gather truth I report that I would have to hear all the information to make a change. Christianity doesn’t seek truth it accepts ritualistic thought, a monkey see, monkey do type thinking that to me does not allow clear exhibition of truth. Hence, if one only thinks one thing then there is not a mind to question what we are hearing. So it is with great confidence in my new found freedom of thinking for me that I opened my door and sure enough the infamous knock came.

I went out to greet them and we got into a conversation about Jesus and his name in Hebrew which, notably, in times past has went unchallenged most certainly for a great many of us ignorant. It is the case that right away the witness chimes in saying, “Yes that is His Name in Hebrew [Yahusha], but that in English his name is Jesus. I being a preponderant of truth quickly challenged his version of truth saying that I would like to know all of the information as to make an informed decision. Inadvertently, truth was revealed through that conversation to say that people know truth of some matters but do not share it.

That has opened an entirely different perspective which says that people are cowards or have other motives for not speaking truth in all things.
I began my quest to find out what they know, and one person shared in the beginning of the study that the bible is written in Hebrew, however, the fact that the bible is written in Hebrew is not surprising, but what is surprising is that people have not questioned the letter J since there is no J in the Hebrew alphabet. It is amazing that people can walk out of the church, but still hang on to such teaching of untruth and do not see that people’s names do not change because they go to other countries. It is absurd to think this way! [See: How Did the Name Jesus Originate? ].

One thought on “Go Ye Therefore and Leave out Information!”