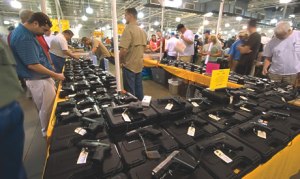 In Fort Worth there is an annual gun show held at the Will Rogers Coliseum where people trade and view weapons and generally sale their merchandise to the companies or businesses. I am only familiar with the event through huge billboards promoting it in the area where I live. There is also a weapons store in the neighborhood that has a billboard as well.

The advantages of these billboards and signs, as well, as the show promotes gun sales and bring awareness of the event. The show as Ogden & Ogden wrote, “Trade shows are large events that bring together many sellers to showcase their products or services.” (Ogden & Ogden, 2014).

An article at the Reveal website denotes pitfalls concerning trade shows and said that there are specific reason why the shows are not a good idea one reason he states is that people do not know why they are there, and said:

How many corporations base their decision to exhibit on total attendance?  They hear that 20,000 buyers will be at the show and think they are going to get a few thousand leads, but don’t have a plan in place or the ability to be able to qualify and follow up on that many.  And how many companies go to trade shows simply for image — because they feel their absence would speak louder than their presence? (Reveal, 2014).

I am going to concentrate on this particular reason and make this subject specific for the mere fact that guns being dangerous in the wrong hands and sometimes be sold for the same wrong reason. For me, gun shows do not educate the public to bring safety and awareness past the sales. Hence, though owners and sellers can come together, the public is not make aware of the potential dangers of a gun in the wrong hands. Why is education needed at a gun show? It is the case, that the hunt is on for not only meat but people where we see blacks being shot down in the street like animals unarmed. Some other areas of concern are:

1.   Failing to study the audience

2.   Going to trade shows with the competitor present

4.   Forgetting to read the exhibitors manual.